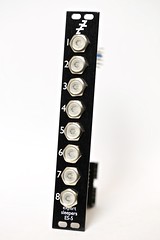 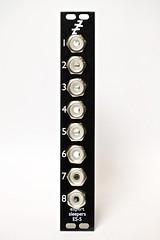 The ES-5 is an expansion module for the Expert Sleepers ES-3 Lightpipe/CV Interface or ES-8 USB Audio Interface.

It piggybacks on one of the ES-3's (or ES-8's) stereo channels to provide eight gate/clock/sync/MIDI outputs on the ES-5 itself, plus further expansion headers to connect up to six expansion modules e.g. the ES-4 Gate Expander.

The ES-5's specifications are as follows:

The front panel is drilled for both Doepfer and Analogue Systems mounting holes (using a 'slot' rather than a single round hole). The power connector is a Doepfer standard 16 way IDC, with -12V furthest from the top of the board.

Note that connection to the ES-3 is by a simple plug-in cable for the ES-3 mk2 and above. The original ES-3 requires some soldering to add the required connections.

February 2017 sees the launch of the "ES-5 mk3". Functionally equivalent to the ES-5 mk2, the mk3 adds illuminated jack sockets, and matches the look of the ES-8 and the other Feb'17 updates.

From February 2014, the ES-5 is shipping in a revised "mk2" form, matching the look of the ESX-8GT mk2. There are no functional differences between the ES-5 mk1 and mk2.

Unlike the ES-3 itself, the ES-5 requires particular software in order to generate meaningful output signals. Currently, the only such software is the 'ES-5 Controller' plug-in, part of Expert Sleepers Silent Way, and our Max/MSP external (see below).

A Silent Way licence is not included with the ES-5 - however, the ES-5 Controller plug-in functions in a licence-free mode, so ES-5 users are not forced to buy Silent Way. Such users can than evaluate the rest of the Silent Way suite in demo mode.

We provide an 'external' for Max/MSP to enable users of Max to easily integrate the ES-5 into their patchers. This can be downloaded from the downloads page.